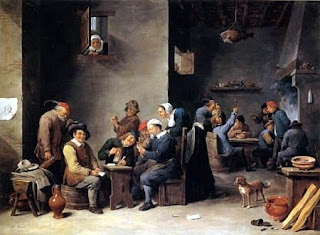 Maria Goosens, known as Tall Mary”, emigrated from the Netherlands to New Netherland in 1649. According to the Accounts of Receipts and Disbursements by Brant Van Slichtenhorst, as Director of the Rensselaerswyck – 1648-1650, on November 15, 1649, Jan de Kaper brought “Steven Jans, carpenter, together with his wife, child and baggage up the river” (the North/Hudson River).  It was the start of a new life, in a new land, with a new child – their expectations were high and their future seemed limitless.
Steven Jansz was a carpenter – a craftsman whose skills were in great demand in 17th Century
Beverwijck.  Much toil and sacrifice lay ahead for Maria and Steven but the hoped-for rewards to come were well worth the hardships facing them.  To increase their income, Steven and Maria operated a tavern in their home – not an uncommon situation during that period of history.  Steven worked as a carpenter while “Tall Mary” ran the tavern.  The colony had ordinances regarding the pricing of the liquor and the hours of operation of the taverns – these would seem to have been established to help keep order and decrease the chance of arguments. But the real purpose of the ordinances was to give the authorities the information they needed in order to collect the excise taxes.

As one might surmise, there were many disputes between the tavern-keepers and the excise tax
collectors, known as the farmers of excise.  Jan Maet, a farmer of excise, “. . . came into Steven Jansz’s house on February 21, 1655, “. . . throwing many abusive words and wounding Jansz with a knife . . .it probably had to do . . . with Jansz’s refusal to pay the excise.” (p.308, #1)

“Tall Mary” appears a number of times in the Court Minutes of Fort Orange and the Court Minutes of Rensselaerswyck.  In December 1654, she was called to court regarding the ownership of a water pail.  April 1655 finds Maria in court again, apparently she sold a bed that did not belong to her.  In 1650, Maria was involved in a dispute about keeping track of the drinks her tavern customers had consumed.  Sometimes the number of drinks were recorded by placing marks on a blackboard.  “Maria Goosens was accused of having erased 2 strokes (on the blackboard) at the same time. . .by erasing two strokes Maria may have cheated the men who were entitled to the drinks of a round of brandy . . . This incident ended with four men wrestling on the floor, one person stabbed in the side and one person confined to the limits of Rensselearswyck.”  (p.307, #1)

Though the tavern the was a place of conviviality and comradery, it could also be a place of anger, insults and violence. There was always certain “ characters” who brought mayhem wherever they went.  Such a person was Harman Jansz van Valckenburgh, nicknamed “Scheele Herman” (Cross-eyed Herman).  He had threatened to beat Steven Jansz in the tavern.  Cross-eyed Herman had been accused of attacking people, breaking into houses, starting fires and “befouling” people.  When he accused Commissary Dykeman’s wife of “carnal conversation” with others, he was “put in the flogging iron and on his breast a sign with the words ‘False Accuser’ was placed. (p. 204, #2)

The most serious offense Maria was accused of was selling brandy to the Indians.  There was a great fear of Native Americans who had consumed alcohol – it was believed that inebriated Indians were violent and, therefore, a danger to the colonists. The Beverwyck court commented that “this is a matter of dangerous consequence which may cause the ruin of the country.”  On September 1654, Maria was accused of selling brandy to the “savages” – she denied the charges and the case was dropped.  On November 3, 1654, she admitted she sold brandy to the Indians and in December of that year, she was given a “. . . warning not to do so any more in the future, on pain of arbitrary correction.” (p. 912, #2)  The Court Minutes of Fort Orange and Beverwyck for Tuesday, June 8, 1655, record that, “Maria Goosens, wife of Steven Jansz, charged with and having confessed to the sale of some brandy to the savages, is ordered to pay a fine of 300 guilders and prohibited from coming into this place for a year and six weeks, and this by way of a pardon and intercession in her behalf on the part of the magistrates.” (p. 223, #2)  “After Maria’s . . . banishment from Beverwyck for a year and six weeks, she would soon run her own place at the other side of the village . . . Goosen Gerritsz had bought a house there, near the north gate, together with Jan Baptist Van Rensselaer, starting in 1657, he (Gerritsz) paid for her house rent and some necessities and repairs.” (p. 304, #1) 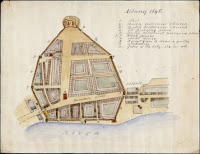 Goosen Gerritsz’s relationship with Maria Goosens is a subject of speculation among historians. They are only 13 years apart in age, so it is doubtful that he was her father -perhaps she was his sister.  “Gerritse had a relationship of such a nature that for a long time he took care of her when she needed help.” (p. 302, #1)  Maria would need help when her marriage ended.  “In 1655, . . .the village’s only case of marital separation, the case of Maria Goosens and the carpenter Steven Jansz, which would lead to an official divorce in 1663.”  (p. 246, #1)  December 29, 1663 was the date on which the marriage of Steven Jansz ( Jansen Coninck- as written on the court record) and Maria Goossens officially ended – “making known that on account of divers disputes and differences (God help them), they, now for more than eight years have kept apart and been separated from bed and board . . . there is no likelihood (they) will again unite to live together . . . and after mature consideration do hereby fully and absolutely absolve each other henceforth and forever from their nuptial and marriage relation.” (p. 264, #4)  Maria got custody of the children – Steven renounced his paternal obligations.  “Maria Goosens shall remain in full possession of the estate, all debts and credits for her own profit and loss.” (p. 264, #4) 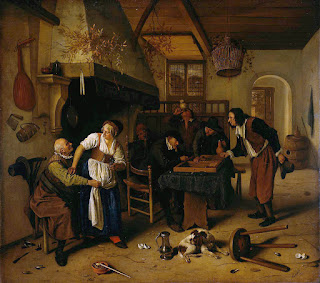 Posted by Crailo State Historic Site at 9:19 AM